«Learners with entrepreneurial skills know what their employers do and what responsibilities they assume.»

«Entrepreneurial thinking and acting enables students to positively shape their world and change it.»

The sponsorship of the initiative "Entrepreneurial Thinking and Acting in Swiss Vocational Schools - Economic, Social and Ethical Dimensions" lies with the Olten Vocational Training Center (BBZ Olten), represented by Georg Berger. Georg Berger is director of the Olten Vocational Training Center, president of the Swiss Conference of Directors SDK-CSD, and member of the Swiss Commission for General Education.

After the end of the project, the initiative will be carried out under the auspices of the Swiss Conference of Directors of Vocational Schools SDK-CSD. The SDK-CSD is the largest conference of school directors in Switzerland. It represents the interests of 140 members who are active in the field of vocational education. The SDK-CSD is the national organization of vocational schools and has access to the «Verbundpartnerschaft», i.e., the political actors responsible for the overall management of vocational education and training.

First steps and successes: 1,400 vocational students from the cantons of Bern, Solothurn, Ticino and Valais have already developed their own business ideas with the myidea.ch program. These range from upcycling old clothes, products that enable a zero-waste lifestyle, to handicraft businesses with interesting niche specializations, to individual creations made of wood. All of these vocational learners have covered the topic of entrepreneurial thinking and acting with teachers in general education classes at their respective vocational schools. The teachers had previously taken part in a respective further education course. 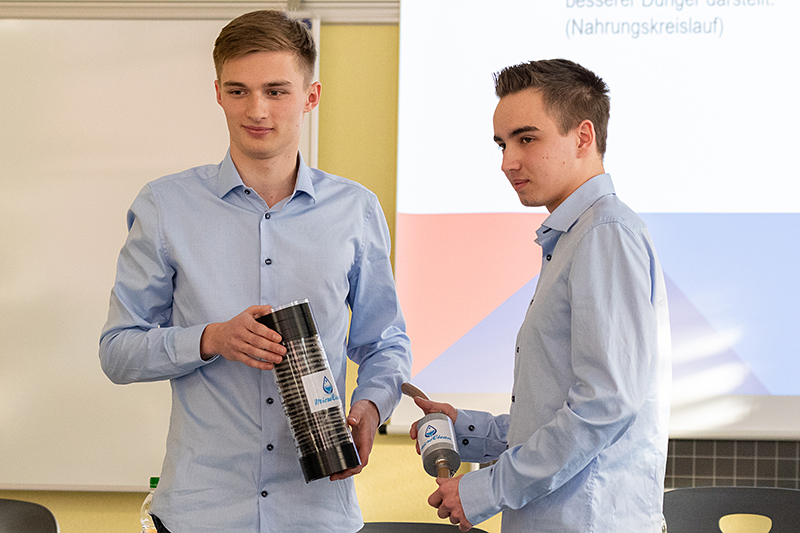 The two automation technicians Aron Düringer and Kevin Bewsher with their project.

Entrepreneurial potential is certainly present. More than two-thirds of a cohort opt for a vocational apprenticeship. And two of them have already proven that the ideas of apprentices can be impressive: Aron Düringer and Kevin Bewsher, two apprentice automation technicians at the Olten Vocational Training Center, came up with the idea for a filter that prevents microplastics from being discharged into wastewater. At the «YouthStart European Entrepreneurship Award» in Barcelona in November 2019, they won second prize in the «Idea Challenge» category.

The research work all pursued the overarching goal of creating a better understanding of how to effectively teach «entrepreneurial thinking and acting» to vocational students. In particular, entrepreneurial skills and attitudes, knowledge relevant to entrepreneurship, awareness of possible reasons for failure («Sense of Failure») as well as self-efficacy and initiative were expected to be positively influenced. All projects were funded by the State Secretariat for Education, Research and Innovation SERI. The research program consisted of two main phases:

The objective of the first phase was to develop an entrepreneurship program to improve the entrepreneurial skills profile of vocational school students at upper secondary level, to measure the impact on participants and to formulate recommendations. This intervention study involved 5 vocational schools, 6 groups, and approximately 80 learners. To measure the impact of the program, participants completed a questionnaire before, directly after, and 4 to 5 months after completion. Entrepreneurship-specific psychological variables, beliefs, competencies, knowledge, and intention to start a business were measured.

This first study showed that vocational students can successfully acquire entrepreneurial knowledge and competencies. Significant differences were found in the intervention group regarding students' self-assessment, for example regarding the «feasibility of starting a business»  or the «implementation of a business idea». In addition, a significant increase in entrepreneurial knowledge was found. The effect sizes could be estimated as medium to large (Volery, Müller, & Oser, 2012).

A second research project was conducted starting in 2012. This project focused on the question to what extent start-up education that also includes case studies of failed companies (so-called «negative case studies») can prepare learners for the possible dangers of starting a business. The intervention study was conducted with 10 vocational schools and 22 student groups (420 learners in total). The intervention consisted of a more advanced version of the entrepreneurship program developed in Phase I. Students were divided into three groups: One group learned with negative case studies (with failure), one with positive case studies (no failure), and a third group learned without case studies. Participants from all intervention groups were taught entrepreneurial knowledge, and all had the opportunity to develop a business idea. Pretest and posttest questionnaires were available from 469 respondents (379 total from the intervention groups, 90 respondents served as the control group). Although not all hypotheses were confirmed and effect sizes were rather small, learning with negative cases was found to increase students' knowledge of business insolvencies. It also improved their ability to be aware of potential hazards that occur when starting a business (Mueller, Oser, & Forsblom, 2018).

Why are entrepreneurial competencies important?

The successful development and partial implementation of a business idea enables important self-efficacy experiences. In this way, skills can be developed that are of enormous importance, particularly with regard to preparing vocational students for future work models. There is much to suggest that digitalization will give rise to new forms of work in which personal responsibility and initiative will play an even greater role.

Is ETA included in the framework curriculum?

Our focus is on the implementation in general education classes (GE) and the anchoring of the topic in the school curricula for which the cantons are responsible. At the same time, we strive to actively introduce this topic in the review of the framework curriculum.

How can ETA be introduced in the canton or in the school?

The «ETA» initiative is to be spread via further education of teachers. In this way, a whole network of teachers can be built up who can all draw on a comparable basis of understanding. Only through the «snowball effect» made possible in this way is a nationwide dissemination at all possible. The concept of the basic 4-day training requires participating teachers to take on the role of learners, that is, develop a business idea, a related business model, a business plan, a marketing concept etc. In this way, they learn about the difficulties on the way to developing a business idea. Later, teachers will implement the same steps with their own vocational students.
‍
Interested parties can register with Roland Nebel, Head of Adult Education Center Olten: roland.nebel@dbk.so.ch

Who is the sponsor of the ETA program?